After the big-rain and associated floods, the Christchurch Tramping Club and Wednesday Wombles hooked up with the University of Canterbury's Student Volunteer Army (SVA) to help out affected communities. On this trip, twelve of us went to the Glentunnel Holiday Park, which had been flooded by the Ashely River and Surveyors Gully Stream. Our task was to remove deposits of river gravel and lumps of asphalt (torn from the access road) from the sodden lawns. The twelve were: Rachelle Binny, Natasha Sydorenko, Allan McInnes, Alla Joutovsky, Tina Morrell, Eric Skea, Kate Taylor, Andy Buchanan, Gilbert Hunt, Denise Hiskemuller, Rob Brook and Bryce Williamson. We were also accompanied by a similarly sized group of assorted students.

We assembled at the UC Student Associations Haere Roa building at 7 am, were briefed by the student organizers and piled into UC vans -- although Natasha, Allan and Eric preferred to take a car to allow for more flexibility of knock-off time. 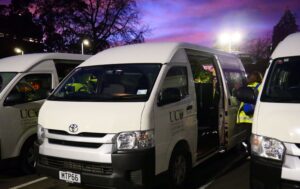 UCSA, Haere Roa builing at 7 am

We drove along SH73, with Sophie, our driver, unintentionally (I think) taking a long way around. There was a very pretty sunrise, which lit up the snow of the nearby mountains. 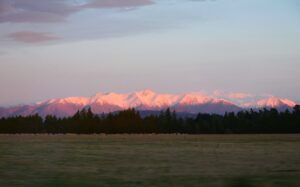 After the briefing, the wheelbarrow, spades and shovels we unloaded and we were working before 8:30 am. 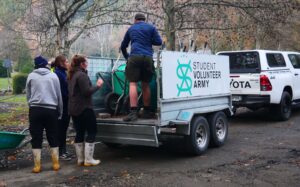 Morning tea break was at 10:30 am -- including hot sausages and fried onions!

Back to work. We had pretty much finished the front part of the lawn, building up a sizeable mound of gravel.

We shifted further back in the grounds, where we were instructed to leave the gravel on the ring road, saving us a good deal of barrowing.

Lunch time was set for 2 pm. The work was heavy and hard, and the last half an hour seemed to drag. Rob showed us an alternative use for wheelbarrows, much to the amusement of his onlookers. 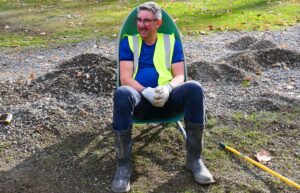 Rob shows us another use for a wheelbarrow

Natasha, Allan and Eric left in the car at about 3 pm, joined by Kate and Tina. The rest of us worked on till 4 pm, at which point we gathered all of the barrows and tools to be packed onto the SVA trailer.

I think that "we" (our group and the students) did a pretty good job, and the Holiday Park people were very appreciative. More work is needed to clear gravel from more remote parts of the park, but probably a good deal less than half of what we achieved. It was hard work, the most taxing physical exertion that I have undertaken since shovelling silt after the 2010/11 earthquakes. But I think it was fun (of the type-two sort). 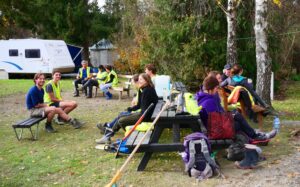 Stringing out lunch a bit

I certainly enjoyed the company (including the students), the copious food provided by the Holiday Park, and even the Speights! And thanks to the SVA for the logistical support and organization.

This is an excerpt of the full length post by the original author, Bryce Williamson.
Click here to see the full version.

Are you a secondary school that values the volunteering efforts of your students?
If so, then you're eligible to receive a FREE SVA Award Info Pack!

The SVA Service Award programme is a nationwide initiative that recognises and awards all secondary school students (Year 9 - Year 13+) for their volunteering efforts!

Are you an organisation that values the volunteering efforts of the young generation?
If so, then you're eligible to receive a FREE SVA Award Info Pack!

The SVA Service Award programme is a nationwide initiative that recognises all secondary school students (Year 9 - Year 13+) and their volunteering efforts within your organisation.